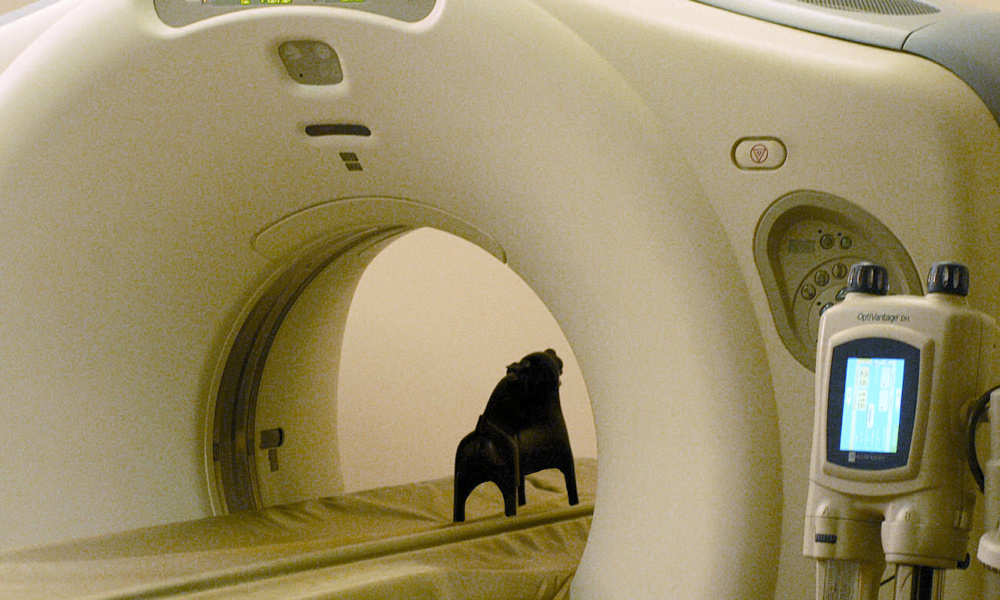 The examination of works of art using electromagnetic rays

A work of art is assessed, judged and commented on by a person viewing the object, itself dependant on the presence and intensity of light that is comprised of electromagnetic rays. To see what is not visible, like some of the colours in a rainbow, experts apply scientific methods to works of art that enable them to understand the past (preparatory drawings or retouches under the painted layer…) and the present (xylophage insects, the causes of current damage…), methods that include ultraviolet light, UV and IR cameras, x-rays, tomographic cross-sections, x-ray fluorescence, the electron microprobe and x-ray diffraction.

Electromagnetic rays have become increasingly mastered by man. Not only do they increase our vision of far-off planets but they can also be used on works of art. From observation to understanding is often a small step that historians, experts and researchers can take using powerful computers. Before examining this subject, however, a summary of what we call ‘eyesight’ is necessary.

The Limits of eyesight

Eyesight enables man to move through spaces by perceiving objects that reflect rays from the sun.

The eye visualises the colours of a rainbow reflected on surfaces bathed in light. Linked to the brain and used as a pair, our eyes enable us to perceive volumes, perspective and distances.

Like all gifts of nature, however, no matter how marvellous they are, the effectiveness of eyesight is restricted by the extent of the electromagnetic rays reflecting sunlight or artificial lighting. The intensity of ambient light also plays an important role. In the absence of light, ie, in a total blackout, the eye sees nothing. On the other hand, too much light can be blinding, again exceeding the limits of our vision.

Eyesight and the perception of art

A work of art that raises its creator to the level of a demiurge is assessed by humans using their eyesight, without which a spectacular stained glass window or the magical smile in the Mona Lisa would remain in the dark of the night.

Using one’s eyes is an obligatory passage and nearly the sole means by which a painted or graphical work or a sculpture can be appreciated. They are used not only in the creation of the work but also to inform our brain of the work’s aesthetic qualities.

Like the expert, the art lover always relies on his eyesight to assess, comment on and judge the work at hand.

The judgment of an art lover is based on his own sensibilities, which include his taste, his culture and his experience. That of the expert, while not neglecting such obvious parameters, always relies on such aesthetical criteria but nowadays also relies on examinations and analyses that use modern scientific methods.

Such means, whether they be cameras, computerised sensors and receptors or computers, are devices that have been created by man to explore the reality that surrounds us and that our natural senses enable us to perceive.

Such new means allow us to better understand the past and the present inherent in a work of art, its composition and the damage that it may suffer from. Rejection of such means by certain non-professionals, even if experienced, would appear, at the end of this second millennium, to be somewhat anachronistic.

At the end of this 20th century, it is human to demand that the work of art reveal its innermost secrets. To pierce the mysteries contained in the material, he uses, among other things, all sorts of electromagnetic rays to increase his visual acuity. All that is needed is medical equipment such as a scanner or cameras that have been perfected for space exploration.

Technically, the eye is a camera that transmits forms and colours reflected by natural or artificial light to the eye. In the total absence of light, it cannot distinguish anything.

Light is comprises of electromagnetic rays travelling through space that have a length of between 800 nm (nanometres) (1 nm = 1 billionth of a metre) and 350 nm.

The colours in a rainbow are distributed over 800 nm to 350 nm, commencing with red, then orange, green, blue and violet. Rays that are more than 800 nm are called infrared while rays of less than 350 nm are called ultraviolet. From 10 nm to 0.01 nm, rays are called x-rays (discovered by Röntgen in 1895), followed by the gamma rays (one of the three forms of rays emitted by the nuclei of radioactive atoms).

In less than one century, scientists have produced cameras or film (x-ray radiography) that can see rays that are invisible to the naked eye.

The well-known Wood’s lamp (from the name of its inventor) is used on an everyday basis to detect recent retouches to paintings, furniture and woodwork.

The tube of the lamp emits rays that are situated beyond violet in the visible spectrum. This ultraviolet light enables the eye to distinguish between surfaces that are more or less violet depending on the degree of absorption and the fluorescence of the lighted surfaces. In order to increase visual acuity, the observation is carried out in a total absence of light. Recent retouches to a painting, restorations or false signatures can be easily identified using the lamp due to recent molecules having a different level of absorption compared with the original molecules.

These cameras are electronic eyes that operate by visualising the reflection of rays under the level of visible light in the ultraviolet or infrared ranges.

The image is produced in black and white on a monitor. Adjustments can be made depending on the density of the surfaces being observed and the intensity of the rays.

The cameras used by the laboratory in the Louvre Museum are, like ours, Hamamatsu cameras that cover the range of infrared rays from 760 nm to 2,200 nm and that of ultraviolet rays from 400 nm to 200 nm.

An examination at this range of infrared enables a penetration of the paint layer of paintings, depending on the composition of the pigments, and the discovery, sometimes, of a preparatory drawing, a hidden signature or overpainting.

Rays in the ultraviolet range have a wavelength that is considerably shorter and expend more energy than light. A camera that has been adapted for ultraviolet light enables a visualisation of the various recent interventions to the surface of a painting, such as a signature that has been added or a restoration carried out.

Until computers were invented, x-rays were used in so-called conventional radiography to visualise a body or object through which such rays are projected onto a black and white photographic plate.

The first scientific examinations of paintings using radiography were carried out at the beginning of the 20th century and are nowadays used frequently (cf, full radiography of the Marriage at Cana in the Louvre Museum in 1992).

Then, in the digital era, the scanner was born. X-rays that traverse a volume lose their intensity depending on the resistance encountered and end their course on small, one-quarter of a square millimetre, sensors.

The sensors transmit such intensities to the computer using a digital value from 1 to 120. The computer, directed by the operator, then recreates an image that enables the visualisation, by successive cross-sections, of the volume being examined.

The digitalisation of x-rays produces a better image by reducing brightness and increasing the intensity of dark areas.

X-ray fluorescence is a technique that analyses the mineral components of a surface.

The operator sends a tightly channelled x-ray beam to a surface, the reflection of such rays being collected by a sensor linked to a computer that identifies, with the aid of a spectrum, the composition of the elements on the surface.

The emission of x-rays is also used in a scanning electron microscope to analyse mineral particles in paint layers.

This method has the advantage of being able to analyse the composition and exact location of a particle one micron thick in a layer of paint.

Through successive comparisons, the expert can determine if the pigment that is present was used at the time by the presumed artist and his workshop or if it is a pigment that predates the 19th century being used, for example, for a work presumed to be from the 16th century.

X-ray diffraction is an analysis method that is in full development. It enables the structure of the most complex molecules (DNA) to be studied. Being a technique for analysis, it is outside the subject matter of this article, which covers the techniques of visualisation.

The use of electromagnetic rays provides a better technical understanding of works of art.

While the scope of their application is, therefore, limited and cannot extend to subjective assessments such as an appreciation of beauty or authenticity, they do in many cases provide a significant contribution.